Founded in 1999, Scarfo’s Meating Place has been a mark above in the meat industry and the community with the award winning sausages in Traditional Barbecue Beef and authentic Italian Continental Sausages, where the family recipe has been passed down from three generations of Scarfo’s in Western Australia.

During and after World War II Antonio Scarfo owned a market garden in Balcatta. Antonio proceeded to pass down the knowledge to his two son’s Joe and Pat Scarfo, who went on to establish the Odin Road Growers Market on 10 acres of land in 1975. This ushered in a new concept of selling directly to consumers. The fresh produce market continued on the family name and the Scarfo’s deep rooted love for the community.

Following the Scarfo tradition, Joe’s son Tony also wanted to become a business owner. Tony pursued the direction of butchery at age 15. Joe believed in his son and within that moment Joe registered the family name Scarfo’s Meating Place; Tony never let his father down. Tony finished his apprenticeship and went on to buy his first shop aged 20 in Balcatta on Jones St. His business thrived there for 4 years until Tony set his eyes on the shop where he originally learnt his trade. Again another successful venture into creating his formidable presence in the meat industry. 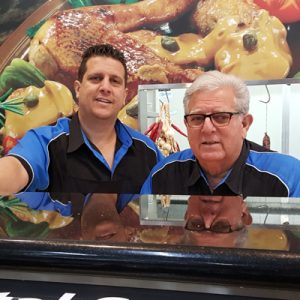 In a traditional sense, it is common for the son to follow the father. Finally in 1999 Tony had approached his father to join him in the meat industry in a new shop. Tony moved his ambitions from north of the Swan River to the southern side, Scarfo’s Meating Place in Melville Central. Luck followed Tony with his father by his side who see each other more as best friends rather than father and son.

Together the father-son team established a well-known business with a personalised family name, by winning many state and national awards for their sausages. The countless awards fill a display cabinet on the corner wall of the shopfront. With Tony and Joe together holding over 20 years of experience, the business still thrives and family is always key to keeping the small business alive. Tony and Joe truly believe that the local community is a part of this family which stems back generations.

We hope to see you down at the Meating place and join the family.